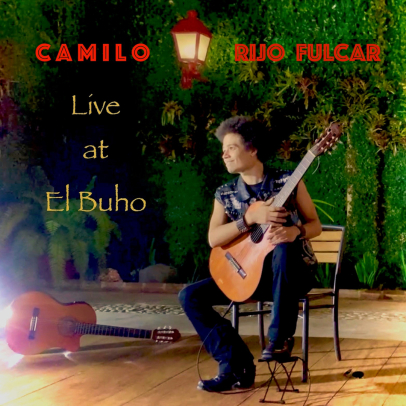 New release of classical guitar music at its best!

While he made his first experiences in the world of music with his death metal band "Gangrena Cerebral“, he discovered his love for classical guitar thanks to Dominican guitarist & cellist Geann Alberto Mendez, who was one of his greatest inspirations to dedicate himself to this instrument.

He started to study classical guitar as disciple of Grandmaster Ruben Gonzalez Avila at the National Conservatory of Music in Santo Domingo (DR).

During a tribute concert that took place at the conservatory in 2015 Camilo discovered the work of the famous Dominican composer Rafael "Bullumba“ Landestoy, and upon learning to know the work of master "Bullumba", Camilo created a great friendship with work and composer and decided to dedicate himself to promote his compositions. The same year Camilo started his career as a classical guitarist.

In the Colonial Zone of Santo Domingo he founded the "Conde Little School of Music", which is a non-profit project and with which he seeks to rescue street children by teaching them music as well as bringing art and healthy recreation to the community, and where he himself still plays as a street musician at times.

As a product of his contribution to Dominican society he has been recognized as finalist for the "Man and Woman of the Year Award" (Premio Hombre y Mujer) of the magazine "Diario Libre" in 2017.