Mickie D's Unicorn is a band project of the Berlin artist Michael Duwe since 1978, with changing guest musicians and producers. His first solo album had been the first release on Klaus Schulze's then newly founded IC-Label in 1979.

Klaus Schulze, electronic mastermind and co-founder of the so called Berlin School of Electronic Music, and Michael Haentjes, at that time a young music journalist (later the founder and ceo of edel records) had launched the label and, with the record company WEA (Warner Brothers Germany), they had found a strong partner.

Klaus D. Müller, friend, co-worker and later publisher of Schulze, and Mickie got to know and appreciate each other during the recording of Ash Ra Temple's LP "7up". Müller discovered Mickie's music and recommended him to Schulze as artist for the IC label. 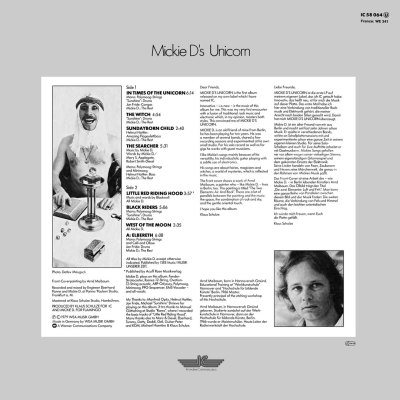 "Mickie D's Unicorn is the first LP on my own label which I have named IC.
Innovative, i. e. new, is the music of this album for me. This was my very first encounter with a fusion of traditional rock music and electronic which, in my opinion, masters both styles. This convinced me of Mickie D's Unicorn.

Mickie D is an old friend of mine from Berlin, he has been playing for ten years. He was a member of several bands, shared a few recording sessions and experimented at his own small studio. For his solo record as well as for gigs he works with guest musicians. I like Mickie's songs mainly because of his versatility, his individualistic guitar playing and the subtle use of electronics. His songs are about fairies, magicians and witches, a world of mysteries, which is reflected in the music."

"IC was supposed to release artists from the circle of musicians around Klaus Schulze, who primarily used electronic instruments for their music, and I liked Mickie's music a lot, as he composed wonderful pop songs with sequencers, great Moog synthesizer sounds and with rocking guitars."​

"When I first heard Mickie D's Unicorn in 1979, for me it was like the continuation of "Dark Side of the Moon", and the album still is one of my favorite records today."